Last October I wrote a post for ThreadATL about long-term sidewalk closures at construction sites throughout the city. It’s a problem that has long hampered walkability in some of Atlanta’s most urban neighborhoods. Fixing it has become a top priority for walkability advocates.

Several months later, there is some tangible progress to report. In Midtown, about a half-dozen large construction projects have moved forward since last fall, and we are definitely seeing an effort to abide by the City’s stated policy on sidewalk closures — a policy that makes it clear that full-block, long-term closures are an option of absolute last resort.

In several of these cases, a temporary walkway has been created in the street, taking a full lane of traffic on major roads like Spring and West Peachtree. The impact on traffic flow is modest. These are oversized one-way streets to begin with, and three or four lanes remain per direction. But even a minor inconvenience to drivers for the sake of pedestrian safety would have been hard to imagine only a few years ago.

What we’re seeing in Midtown is progress and it’s encouraging. That said, pedestrians still encounter significant obstacles throughout the city and region, sometimes  in unexpected places. About a week before Christmas, I was surprised to encounter the following sight at MARTA’s Avondale station in Decatur: That’s a pedestrian bridge that spans a tangle of railroad tracks and busy East College Avenue, and it’s the only direct access point to a large area south of the station, home to several destinations including the East Decatur Station retail and office complex and the busy DeKalb County DFCS office. The bridge was closed to accommodate a new development on what was formerly the station’s south parking lot, part of an ambitious effort on MARTA’s part to promote “transit-oriented development” (TOD) on underutilized land around rail stations.

While the goal of the TOD initiative — increasing density around stations and, hopefully, ridership — is a worthy one, the impact of this particular project on people who already use Avondale station has been significant. Here is the detour Avondale riders bound for the East College side of the station have been resorting to since December: I am frequent user of Avondale station, and the pedestrian bridge; I use it to access the East Decatur Station office of the Georgia Sierra Club, a group whose board of directors I currently chair, and a group that chose this location specifically for its easy access to MARTA. I’ve done the above detour on foot several dozen times now, and it’s been an eye-opening experience, particularly insofar as it highlights the punishing walking conditions we often find in areas immediately surrounding our suburban transit stations. 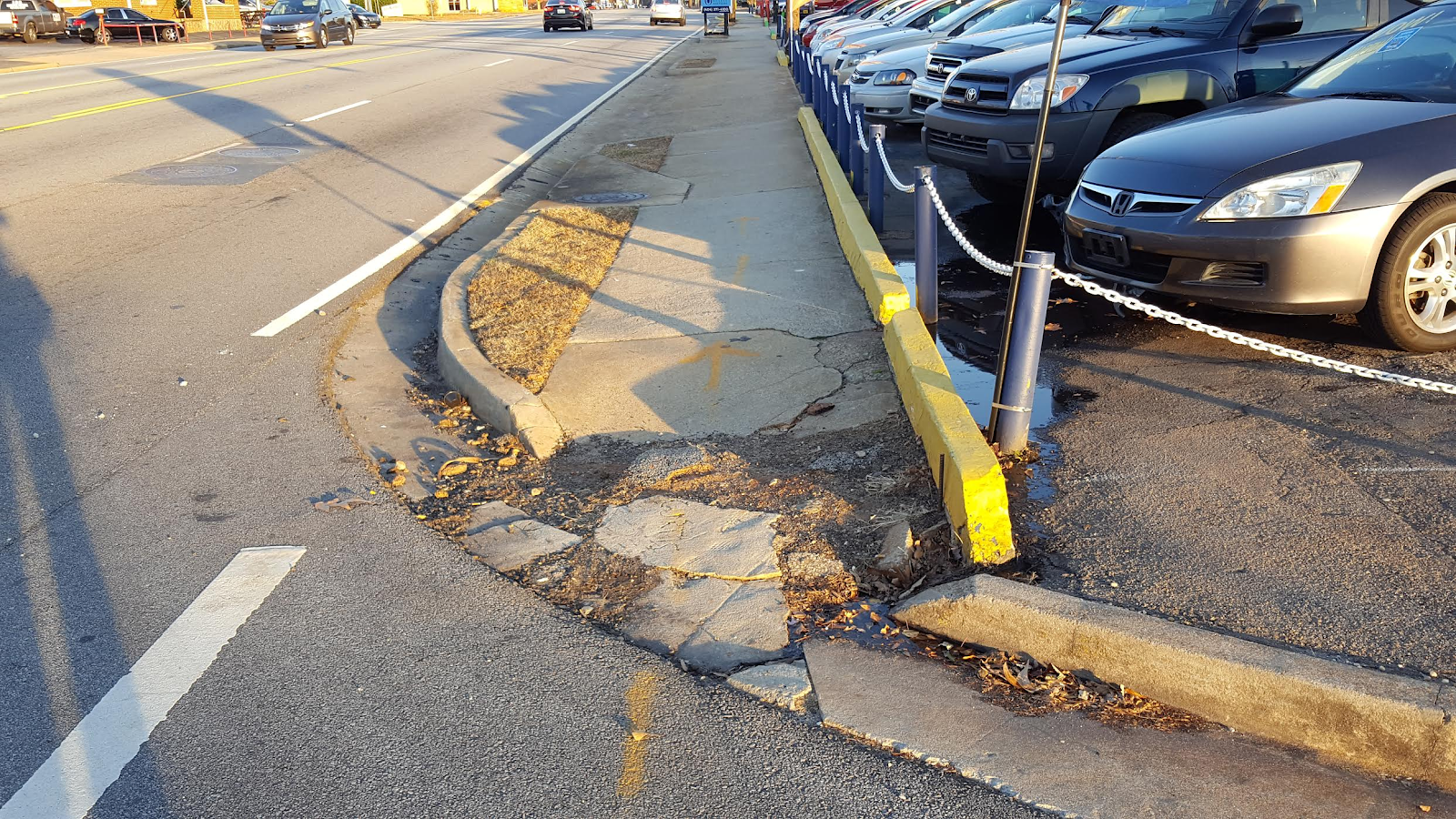 It’s been a frustrating situation, similar to the sidewalk closures in Midtown — and thankfully, this particular case also has a positive resolution.

Temporary stairway to the rescue

The Sierra Club was originally told that keeping the Avondale bridge open during construction was not feasible.  After reaching out directly to MARTA’s Planning and TOD offices, and a conversation with a friendly MARTA board member (never underestimate the importance of friendly board members), we were informed that MARTA would indeed be installing a temporary stairway to restore access to the bridge for the remainder of construction. And sure enough, I was at the Sierra Club office for a meeting over the weekend, and the new temporary wooden stairway is now open to riders: 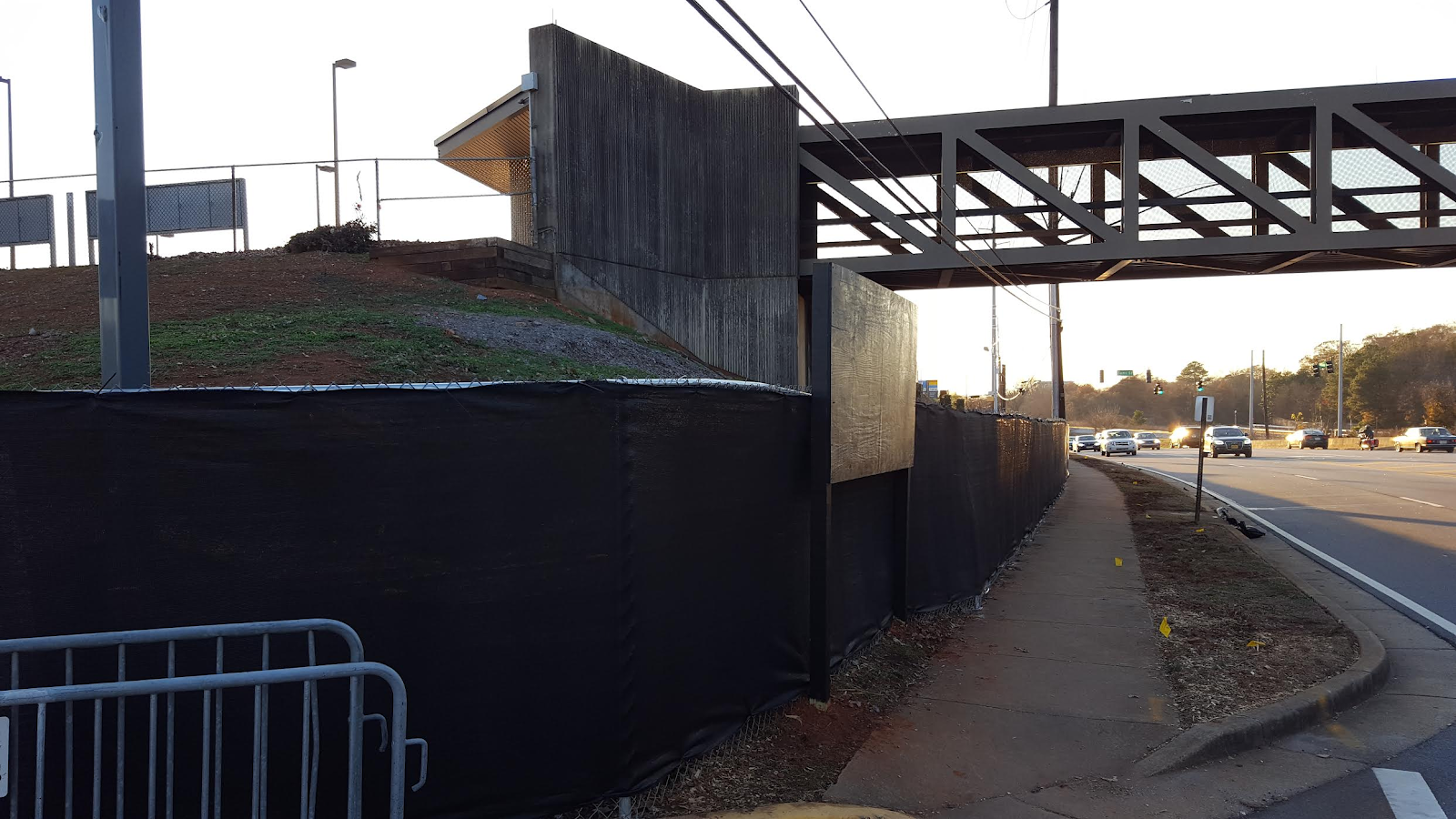 So, credit to MARTA for being responsive and moving quickly to address a problematic situation for its riders. Nonetheless, for over two months pedestrians had to make a lengthy detour along dangerous roads and that’s not trivial.

Setting a standard for future projects

The basic layout of Avondale, where the station complex straddles a major railroad/highway corridor with the station itself serving as an important pedestrian connection between the two sides, is a fairly common one; I count eight others with an “Avondale-style” configuration, several of which have been targeted for TOD projects. In any of those cases, losing pedestrian access to an entire side for any significant amount of time would be huge blow to walkability in the surrounding area. Hopefully, the temporary accommodations being provided at Avondale set the standard for any future projects — but continued vigilance is in order.

Back in Midtown, we also see reminders of the need to stay vigilant. Remember the exemplary protected in-street walkway that Northside Hospital installed for its project on West Peachtree Street? Well, here is what you currently encounter upon reaching the north end of that block: Directly ahead is a new full-block closure, courtesy of Related Group’s 22 14th Street development. What’s especially frustrating is that this closure effectively cancels out the benefit of Northside’s commendable effort one block south; pedestrians are still forced to make two five-lane crossings of a busy high-speed street, just as they would if both blocks were closed.

And in a way, this two-block stretch speaks to the fundamental challenge we face here. Creating a truly walkable environment is an all-hands-on-deck endeavor; as we see above, all it takes is one holdout to render the best efforts of others for naught. Going forward, our goal should be to make what are currently examples of standout behavior so routine that they don’t stand out at all.

So, clearly there is still work to be done. But I take comfort in the fact that we have seen meaningful progress in just a few months’ time, and I’d like to think that efforts of groups like ThreadATL, PEDS, Sierra Club and others have made an impact. Ultimately, direct engagement with leaders who have responsibility for our public infrastructure can — and does — make a difference. And it’s important that they continue to hear from us.

About the Author: David Emory

Thread ATL is a nonprofit organization advocating for improved urbanism in the City of Atlanta.

Email us | Board of Directors